i am so getting one of these don post gorilla suits

Advertising through product placement is by now a time-honored tradition in film and television. Not only does it grant opportunities for advertisers to exploit people young and old by encouraging them to equate consumption with identity, but it also allows for some quick and lazy storytelling and character development via brand identity, as it does in Marcus Nispel’s Friday the 13th, where a fondness for Moët et Chandon speaks volumes about a character’s proclivities. That isn’t to say that product placement doesn’t have its, er, place in the mise en scene of a film, which is how it was most often used in earlier franchise installments. Without further ado, let’s explore the greatest (and sometimes not so great) moments of product placement in the history of the Friday the 13th movies!

community chest? not a chance, ’cause she’s a final girl

Ah, Friday the 13th (1980). A film from a simpler time, with flashback to an even simpler time. The counselors-to-be of Camp Crystal Lake circa 1980ish work and play under the auspices of The New Joy of Sex‘s Steve and his manly short shorts. When off duty, they kick back with Budweiser stubbies and grass (not weed, nor pot, not in that day and age), and a little premarital sex. It’s good for what ails ya. The other star of the placement show in this first installment is good ol’ Monopoly. The venerable Parker Bros game was–and still is–a familiar familial mainstay; in 1980 it demonstrates how ordinary and just like the audience these teens are, albeit a little bit sexy with the strip conversion. Looking back from 2015, land of Cards Against Humanity, it’s a signifier of the nostalgic innocence of the era. 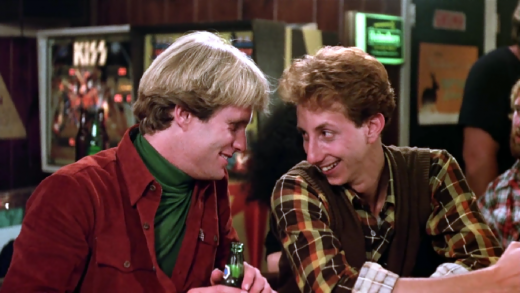 can you believe she seriously thought the lyric was “… and part of every day?”

Like its predecessor, Friday the 13th Part II is all beer and skittles. Well, beer and pinball. And handheld videogames, but those are seriously lacking in the glamour, the mystique, and the primal sexual dynamism of pinball–particularly pinball as manifested bymotherfuckin’ KISS. In 1981, pinball was no longer king, but arcades were. The 1978 Bally game featured in Part II is relegated to the background, a reminder of what youth was like in the halcyon days of the Seventies. Though the counselors of Part II are cleaner cut (not quite preppy, but close) than their predecessors, they grew up on pinball and KISS, and when they go home after a night of drinking, those pelvic thrusts immortalized in the likes of TILT and Pinball Summer will be replicated in the dark. Plus, beer. Being 1981, imports and premium beers are favored: Heineken and Löwenbräu. Plebeian domestics like Bud and Busch are on tap or not being consumed. But as a harbinger of things to come, it’s a Miller Light sign, the first and greatest of the light beers, that gazes benignly down like a cool, blue moon.

3D. 3D. 3D. It’s 1982, and Hollywood is smack in the middle of another (all too brief) 3-D boom. Parasite would be the first horror release in twenty years, but hard on its heels was Friday the 13th Part III (sadly, not stylized Part 3-D as in 1983’s Jaws 3-D and Amityville 3-D). The eye-popping (haHA!) exuberance of 3-D augurs the juggernaut of Reagan’s Great Expansion just getting underway, leading to not only the end of stagflation and recession but an unprecedented bull market. It’s not a great installment, but the kids are dying alright, and everything’s gonna come up roses and yoyos in your face. It’s fitting then, that the product placement in Part III should be as unsubtle as a truck. And well, that’s exactly what you get. Sure, Ali comes out of the market cracking open an Oly tallboy (a sight to cherish in my PNW-transplant’s heart), but that fleeting glimpse is immediately eclipsed by an entire fucking Olympia truck front and center in the frame. Brb, getting some beer. Part III‘s second moment to shine comes with the death of Debbie, the horror fan’s victim, a regular girl who likes to get down and happens to read Fango–featuring an article on the franchise’s own effects whiz, Tom Savini. At the risk of being simplistic, it is here that the franchise develops a Proteus IV-like self-awareness. The tongue is planted firmly in the cheek on this one, and we’re not brownnosin.’

Friday the 13th: The Final Chapter

dibs on the hot one

In a world where daycare workers are accused of ritual Satanic abuse and a crazy new virus called AIDS makes its debut, windows are about to get broken. A child hero will rise, and an undead manifestation of a murderous mongoloid wild child will fall–forever? That’s right, into the fray of the anti-slasher backlash leapt The Final Chapter, bustin through like, five fucking windows (glass! it sucks!). Slammin’ Joe “Fuck Windows” Zito defenestrates everyone and everything, helming an “immoral and reprehensible piece of trash”  fans would love. It’s a film that’s “literally about stabbing”–and throwing shit through windows. Only the most exquisitely subtle product placement could grace such an delicately crafted confection of pastels and pleated pants, and Joe “Flagrante De” Zito takes it home with Camilla and Carey More, the fucking Doublemint Twins. I dare you to not pound gum into your face, hand over fist, while watching this film. The only thing harder would be not defenestrating oneself.

Friday the 13th: A New Beginning

wtf even is this munchies crap? vic’s actions … totally justified

What the fuck, A New Beginning? You had one fucking job, and that was to have Jason dispatch Fine Young Things with style and verve. And a product is only placed if it’s actually a legitimate fucking product that exists within this world, and what is this Munchies Bar shit? And what’s with the Greatest Hits-style replay of moments from previous installments? I don’t hate you, A New Beginning, because despite it all, you have a lot of charm, but damn did you fuck up. Oh, and coke makes its debut. No longer are we chill post-hippies; the party season is upon us.

Let’s face it: when you think product placement in a Friday the 13th movie, you think Jason Lives. And if there’s anything less relevant to Jason, or to the lives of the teenagers both within the film and without, it’s a fucking American Express card. But that’s okay, because it’s the Eighties, Jason’s down with the ladies, and greed is better than good, it’s great! Don’t leave home without it… unless you want to survive the decade/movie, in which case you’re better off sporting Sartre’s No Exit. It’s a little more apt, ain’t it?

1988’s The New Blood takes the Pepsi Challenge with its New Generation… of suck. Jettisoning quality (such as it may be) for novelty, the seventh (!) installment of Friday the 13th brings us Jason versus Carrie, the first truly unlikable cast, and Kane Hodder in his first appearance as the unsinkable Jason V. Hearkening back to the structure of The Final Chapter, The New Blood features two intertwining storylines: Final Girl et familias and Party Kids. About Tina, we needn’t say much, and about the Party Kids, well… they’re jerks. They’re real Clean Teens who’ve got a lot of coke, pot, and generic beer, and I’d rather die than spend twenty minutes with them. But hey, their fingerlicking good party is sponsored by PepsiCo! No longer a grotty little franchise that could, Friday the 13th had sold out, and no amount of blood would wash and cleanse it free from stain–a fitting cynicism in light of the Iran-Contra Affair, the CIA drug trafficking scandal, and the peaking of both the crack epidemic and high crime trends of the Eighties. We don’t need a Coke and a smile; now it’s time for a Slice and a dice.

After an hour on a boat outside Vancouver, BC, Jason prances through a curiously empty “Gotham” for thirty minutes, and we’re treated to a few shots of Times Square in this paean to The Big Apple. If the only marquee we glimpse is for Black and Blue instead of New York Ripper or See You Next Wednesday, it’s okay because “New York” is still a pretty shitty ass place full of drug addict rapist muggers (all in one due to budgetary constraints) run amok. And they have syringes full of the Ooze. For something selling us on Old New Amsterdam, Jason Takes Manhattan is strangely lacking in that Melting Pot flava. At least Jason eventually punches a dude’s head off, which is kind of not shitty, in a mildly amusing sort of way. I Heart New York.

Jason Goes to Hell: The Final Friday and Jason X 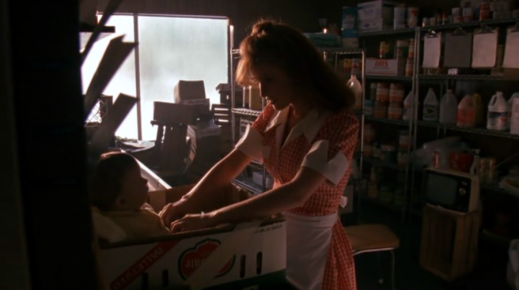 There’s really nothing to say about Jason Goes to Hell, a movie so shitty that no one and nothing wanted to be associated with it.

Jason X, which ended up coming out before the Jason versus Freddy movie that we were promised at the end of JG2H, is understandably nearly devoid of recognizable products, since it takes place over 400 years in the future. In space. With Space Marines. But it does still have plenty of teens and a shady teacher and they go on a field trip, just like JTM. The movie includes a shout out to series creator Sean S. Cunningham using a space billboard advertising for Cunningham Realty’s Lunar Estates, but the only real world reference in the film comes as a brief mention of a historical Microsoft Conflict.

from kiss pinball to this?!

In a series notorious for being artistically-lacking money-grabs, Freddy vs. Jason is probably the worst money-grab of all. It’s apropos then, that the sadly abused Misfits logo makes an appearance, as a lazy form of character development. A Misfits air freshener hanging in a party van is nothing if not pathetic and shamelessly mercenary. Thanks, Jerry Only! Aside from that we’ve got Coke (machine and cans) Sprite and Cannabis Culture Magazine, Everclear, Chloraseptic Throat Spray and Pepto-Bismol, horrible CGI, and well, horrible everything. It’s all offensive: the racism and homophobia, the poor quality, and what the fuck is this hydrophobia bullshit? Jason’s new fear of water, contrived specifically for this film, is just one of the things in FvJ that seems made up on the spot and then explained poorly with ridiculous exposition. It is without a doubt the worst writing of every movie to feature Jason (or Pam or Roy) and that’s really saying something.  Ugh, fuck this movie and the corporate synergy it rode in on.

So are we going to eventually see Jason stalking the grounds of Progressive Insurance Lake? Will he massacre Chiquita Banana Fatties wearing Jansport backpacks while hitchhiking their way to counselors jobs at Apple’s iCamp for Lumpy-headed Kids That Don’t Swim Too Well? Where do you think product placement within the Friday the 13th series will go in the future?

A poster gallery of the psychotronic flicks we’ve been watching over the past month. (Note: We’ve switched from mid-month to month’s end.)

hatchet for the honeymoon, bava, 1970

duck, you sucker! aka a fistful of dynamiteaka once upon a time … the revolution, leone, 1971