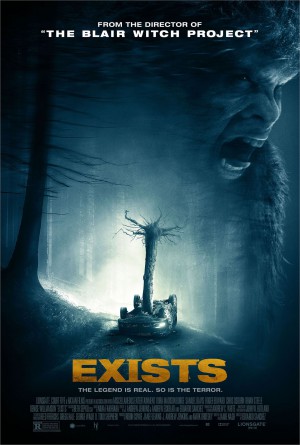 I got a chance this past weekend to see a sneak pre-release showing of the new found footage Bigfoot flick by Eduardo ‘The Blair Witch Project‘ Sánchez. It was another one of those mystery showings, like last year, when I caught The Bay as part of a local event, but oh my god, was it so much more satisfying. Sánchez has a pretty good handle on this found footage stuff, unsurprisingly, him being a big part of why the sub-genre(?!–if that’s even what you’d call it) is as big as it is now. He uses a lot of GoPro footage in Exists, very similar to the way he used GoPros in the “A Ride in the Park” segment of V/H/S2 and while that’s probably my least favorite part of V/H/S2 that has more to do with it being a rehash of a zombie-outbreak type story, and zombie stories, as much as I love ’em, are currently in a state of heavy over-saturation. But Sasquatch … ! That’s a whole ‘nother story. And I love ‘squatches! That isn’t in my About Me, but it really should be. I’ve been a crypto-fiend since I was a tyke watching In Search Of… way back when. And I’ve already talked on here about being a big fan of found footage, so  I was all in with this flick.

Simple set-up: a group of five adventure seekers head out into the woods to visit the old cabin their uncle owns and has mysteriously decided he never wants to use again. On the way up there, driving late at night on a road in the middle of nowhere, they hit something with their car. They didn’t get a good look at what it was, but assumed it was some animal based on a little fur stuck on the car and went on their way. Spoiler: it was not a deer or a raccoon they hit and now something in the woods is feeling really, really pissy.

Now,  to get out of the way my one–well, not complaint, but I guess the one thing I can’t praise the film for–the protagonists in this movie, while not entirely unbelievable (except for a few really stupid decisions) or unlikeable, are mostly meh. They’re a couple of mostly generic pretty girls with little to do other than be pretty and be afraid, a pair of extreme dudes that wouldn’t be out of place in a Mountain Dew commercial, and one stoner than insists on filming everything for Youtube views. You may not passionately hate these people, but I doubt anyone is going to love them either.

That antagonist though! Look, in a Bigfoot flick, the character that really matters most is the critter himself and that’s where Exists really delivers.

I once saw a gorilla at the zoo get angry at and jealous of another gorilla being given Kool-Aid sips on the other side of the habitat. He launched himself from his sitting spot so fast that he kicked up a giant cloud of dirt behind him Roadrunner-style, traveled the whole length of the enclosure–maybe 60 to100 feet or more (I’m terrible at judging distances)–in a split second, and two-hand fist-smashed the other gorilla on the back so hard that you could feel the vibrations from the impact in the ground. That hit rocked the whole area. The Bigfoot in Exists reminds me of that gorilla. This is not the Bigfoot of Harry and the Hendersons. Boggy Creek, this ain’t. It isn’t even Night of the Demon. This thing is terrifying. It is not a slow, lumbering, idiot beast. It is fast, powerful, smart, and scary enough to make Jane Goodall pull a Cartman. “Screw you guys, I’m going home.” This monster makes you think of early man interacting with other apes and wonder how he ever managed to survive long enough for there to be an us now. Exists is like Orca in the woods with a Bigfoot (now that would be a bitchin’ game of Clue,) because killer whales are useless in forests. Even if you hate the kids in the movie, you will still feel for them when this angry creature comes running out of the woods at them, whooping and hollering, because you can’t see that thing charging toward the camera and not be aware of how you would just involuntarily flood the Earth with poo if it was coming after you.

Exists, as I’m posting this, has just been made available On Demand and in select theaters. You should be able to find info about screenings and where to find it On Demand over on the Exists Facebook page. If you’re only going to watch one Bigfoot movie this Halloween, this is the one that will make you plotz. Also, you’re a slacker. Really? Just one Bigfoot movie? I am scorning you so hard right now.

Oh, and there’s a very objectionable scene with a Burning of the Beard. It is not even cool. Not. Even. Cool. I’d have killed everyone before the ‘squatch ever could. Beard-o-philes, you will cringe. They need a trigger warning on the poster. 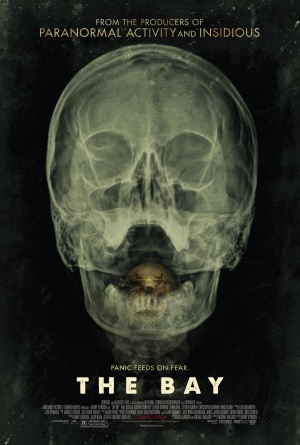 I saw The Bay as a mystery, pre-release screening at an all night horror movie marathon this past October. The circumstances of that viewing were unusual and not ideal for enjoying the movie. I didn’t know what I was watching until the end credits, so I didn’t know what to expect, and I’d just finished watching Slither,  so I was full up on parasites  for the evening. I didn’t want to be unfair, so I skipped reviewing the movie until its release on disc. After another viewing, sadly, my opinion hasn’t changed.

News coverage of thousands of dead fish floaters and bird corpses, stories that were reported on, precede a close up of one girl, Donna Thompson, who intros herself and speaks forebodingly about the story that wasn’t covered, that was covered up. On an unusually warm Independence Day in the small, bay-side town of Claridge, Maryland, cub reporter Donna was there to cover the crab races, the Crab Eating Spectacular, all the usual festivities, and interview little kids and local celebs. She ends up covering much more. That footage, originally suppressed by the government and now leaked by the whistle-blowing govleaks.org, along with recovered cellphone, security cam, skype calls, etc., make up the bulk of the film. What the government didn’t want you to see, what Donna has to expose, is that, on that July 4th, there was something in the town of Claridge, in the water of the bay, inside the fish, in the water from Claridge’s desalination plant, the water they drank and played in. It was inside the people of Claridge. And that something … was chicken shit.

I love eco horror. I also love Found Footage. You’d think an eco horror mockumentary by an acclaimed filmmaker would be a slam dunk for me, but The Bay is less than the sum of its parts. Levinson is an Oscar-nominated writer, Oscar-winning director, but this does not feel like a movie from an A-list Hollywood director. The performances largely don’t work. The movie’s believability hinges on Kether Donohue’s portrayal of Donna, but she’s just not news reporter material. We’re talking Mark Wahlberg-as-science-teacher level of unbelievability. And the writing is just bad, leading to events that feel contrived. Cops walk alone into dark houses, rush into danger with no back up, flip out and go murderous, shooting healthy people for no reason. A couple strolls through a town full of corpses with their baby, instead of getting back on their boat and keeping the baby safe. I can forgive slips like these in a movie that doesn’t strive to look like reality, but this is supposed to be a documentary.

The “chicken shit” thing damages the credibility, too. Claridge is being eaten alive by mutated isopods (parasites that eat fish tongues–I’m sure you’ve seen the picture). It was chicken shit that caused the mutation, mountains of chicken shit full of steroids from a chicken factory that runs off into the bay. It’s so heavy-handed with the chicken shit eco message that the only thing I can liken the chicken shit to is the Tromaville Nuclear Power Plant looming in the background of every Troma movie. And that is exactly what The Bay calls it … chicken shit. A lot. I don’t know how many times it says “chicken shit,” but it’s enough to make a drinking game. (Drink twice the one time someone calls it chicken excrement!) It also reuses bits of previously shown footage. I guess it’s meant to drive points home, but it’s just repetitive. It feels like unnecessary padding. I don’t need to see the clip of the mayor drinking a glass of water, saying how good that water is three separate times. Once was enough. All this adds to the Troma vibe. My first viewing, as far as a half an hour in, I was still waiting for it to turn into a comedy about hybrid chicken-sharks–that would’ve been great! I can forgive repetitive, silly language in a schlocky film, but The Bay is played straight.

It’s also infested with the already cliche crap that pulls you right out of so many other Found Footage flicks: too much camera glitch, forced curse words injected into the dialog to make it sound real, arguments that don’t seem believable, fights about why someone is continuing to film,  characters explaining to the camera why they’re filming (posterity/show the world!), etc. I forgive these problems when I’m watching a movie made by a few noobs with a handicam and $10,000, but an experienced, acclaimed director/screenwriter with a healthy budget doesn’t get the same leeway.

It’s like Levinson was making a serious movie that he didn’t take seriously, like he was just pumping out product that he didn’t feel was worth a real effort. He was slumming and was fine with tossing out a movie with the same old imperfections we’re used to. That sucks, because The Bay had potential. It can be really gruesome and tense. There’s a few super effective scares and skin-crawly moments, including one scene involving a fish and a hidden isopod that rivals Exorcist III’s gliding-nun-with-shears and Signs alien-walking-past-the-hedges scenes. The rashes and blisters on the infected people are pretty sick. Unfortunately, none of the actors sell the appliances. You never get a sense of it being anything other than make up. I can forgive just about any problem if the gore is crazy enough and some of the gore in The Bay is truly gnarly, but not enough to save it.

It isn’t a terrible movie, but it is a disappointment. Too goofy to be serious, too serious to be fun, it fails as schlock, as a serious message film, and as a mockmumentary. It vacillates between trying to be Piranha and trying to be Outbreak and fails at being either. It’s a mixed up, b-grade, mediocre mess and from an A-List artist, that’s something I can’t forgive.

hatchet for the honeymoon, bava, 1970

duck, you sucker! aka a fistful of dynamiteaka once upon a time … the revolution, leone, 1971