Worst case scenario: Longtime pals Dan and Joe, and Dan’s new girlfriend Parker, head up to the slopes of what are CLEARLY New England mountains and definitely NOT the Rockies, one Sunday to enjoy and afternoon of snowsports. Dan is teaching Parker to snowboard, while Joe prefers his skis to the faddish snowboards. They make a few runs, chitchat, grab some overpriced crappy snacks in the cafeteria, and head out for a final run before the slopes close for the week. An unfortunate coincidence leads to tragedy when they persuade (bribe) the lift operator to let them take one last, “wicked fast” run. Their guy is summoned by the boss, and in his haste, doesn’t make it clear that there are three riders still on their way up. When the replacement guy sees three skiers arrive at the bottom, he shuts down the lift and makes tracks, leaving Dan, Joe, and Parker alone, high above the ground, in an oncoming winter storm.

Their surety of being rescued slowly evaporates as first the lights go out, and then it grows colder and windier, and the horror of their situation begins to dawn on them: There’s a storm and the mountain will be closed until Friday. And no one knows they are up there. 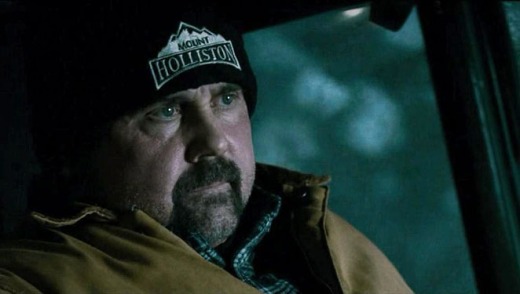 going to mount blood, ain't ya?

It’s just a safety bar, it doesn’t really do anything: Green takes an excellent, naturally chilling scenario and creates a taut, anxiety-ridden survival thriller unfortunately weighed down by (mostly) mediocre performances, a little too much time, and one laughably silly element.

Fisty: Seriously, there are few sentences more frightening than “Nobody knows we’re here.”

Bill: What about, “He knows you’re alone?”

Fisty: Or, “The calls are coming from inside the house!”

But SERIOUSLY, survival horror is superscary. Any kind of survival theme like that, even a non-genre film like Alive! or 127 Hours, has a special element of terror to it … the thought that it could easily be you there. Trapped. Alone. It happened to DeWitt Finley. It happened to the Kim family. It nearly happened to Daryl Blake Jane. And Lifetime has made a cottage industry of movies based on real life in which couples reconcile after being trapped in life-threatening situations.

And that’s one of the strengths of Frozen, that Green captures the feelings of isolation and panic that are natural to such circumstances. Everything he does emphasizes the remoteness of the location, the height at which they dangle precariously, the cold and ice, the fear, the loneliness … . Brr!

objects on lift chairs are way higher than they appear

Bill: None of that would matter, however, had the movie been populated with assholes. Luckily, it isn’t. These characters are pretty likable. At the start of the film, you really do cringe and squirm a bit, knowing that things are not going to end well for these poor kids. Shawn Ashmore’s Joe, would, I suppose, be the “dick” of the three, except that he’s not. He’s a little jealous of his best friend’s girl, who is taking his pal away, but he does his best (even if he fails) to try to keep her from feeling like she’s intruding. And Parker, while she does want to spend time with Dan, is not some time-vacuuming bitchmonster. She doesn’t want to come between them at all, feels kind of guilty for even being there. The dynamics of their relationships all seem genuine and reasonable. Even when the stress levels soar and they snap at each other, they never drop too far into antagonism that they can’t recover and at least attempt to comfort one another. By the end of the movie, everything that you feared may happen has, plus some, and you do feel for the kids.

When the trailer was first released for Frozen, I thought it looked good and I had liked Hatchet, so I was excited for it. I shared the trailer online and got back responses like, “Bill, I’m sorry, but that looks dumb as shit. I’m gonna make a movie where a bunch of douchebags get locked on a roof with no escape for a week. Or a movie where a bunch of douchebags get trapped in a cave. Or a basement. Or a submarine.” And, “Douchebags + shitty script + dumbass naked teens and 20-something audience = Hollywood gold.” Well, guess what, motherfuckers, I was right and you all suck! These aren’t douchebag kids that do dumb white people stuff. They never really seemed like they were asking for trouble. Their dialog is believable, fun and even witty, at least until the shit hits the slopes and things get dark. That “douche+shit+naked” formula may apply to Hatchet (which was still fun) but it certainly doesn’t fit Frozen and a big hi-five to Green for being able to switch gears and deliver good flicks that are so completely different in tone.

How about, “Have you checked the children lately?”

Fisty: Nah, that one leaves me cold. Kind of like the characters. I have to disagree with you on them, because I didn’t care for them all that much. I didn’t actively DISLIKE them either, though, I did dislike how they were consistently being passive-aggressive  and manipulative all though the “getting to know you” opening third of the movie. Conning their way onto the lift sans tickets at the start, followed by a similar use of persuasion and bribery at the end (which of course led to their ultimate downfall) was stupid. Not only did it waste time–cutting out most of it, especially the opening con, would have considerably tightened the flick (who says a movie has to be ninety minutes–cut that shit!) and it’s already clear who these characters are without the lazy characterizations–but it also gave me reasons to dislike them as cheaters, and also implied a vague sort of morality. And this was a situation that called for no moral; it’s better that it just happens by chance. Terrible chance.

But! I will say that I (mostly) liked their interactions, despite passive-aggressive whinging. Shawn Ashmore particularly deserves a shout out for making his “dick” character truly likeable, a real person. I did kinda disapprove of him in some of his early behaviors and attitudes, but he was convincing enough that in the end, I liked him a great deal. I would have even rooted for him to get with Parker, but thankfully Green avoided unnecessarily bolstering his screenplay with any such nonsense. And Parker, too, was finely nuanced. Bell handled her uncertainty at charming the lift guy well, but unfortunately in later scenes she got too histrionic with her emoting and NEVER STOPPED. Though her monologue about her puppy was devastating. That poor puppy was all I could think about while these people were dying of exposure. Because I am THAT kind of dick. 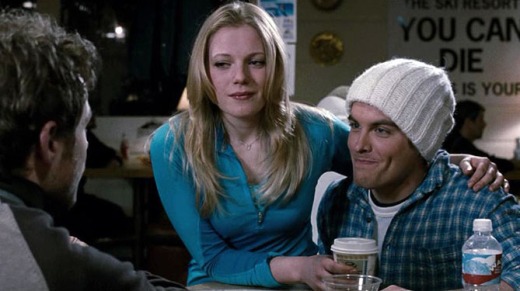 I’m also the kind of dick who will complain about other aspects of the movie, like THE FUCKING WOLVES. I’m resisting my urge to second-guess and nitpick everything the characters did after getting stranded (but I bet I would have gotten out), but WOLVES? Okay, not only are they totally (not) in New England (why DID Green do that? It would have been so much simpler to just have them in the Rockies, Sierra Nevadas, or Cascades), which isn’t really known for wolves, but wolves hardly hever hattack people. Like, super rarely. Wolves are nice! Didn’t he read Julie of the Wolves? Or Brother of the Wolves? Granted, they are surely more likely to attack an injured/crippled person like what’s his name, boring innocuous whipped dude … Dan! That’s it. But it would also surely take much longer for them to get up the courage to approach. Yeah, I’m calling shenanigans on that one. At least Green resisted putting in any antagonist outside of Nature, like some crazed killer or something supernatural. (Though I LOVE Wind Chill, which features people trapped in a car in the snow and menaced by Evil!) Really, even a mountain lion (sorry, catamount since they’re so totally in New England) or a bear would have made more sense. Bears eat people every damn day.

how dare green malign this noble animal who only wanted to help?

Bill: Aw, Parker and the boys were just trying to save money! I have gone to a concert without having tickets, expecting to get some from a scalper when I got there and I have snuck into attractions, switched from one theater to another and all that sort of thing. I wasn’t judging them and I don’t think behavior like that is too uncommon. And those wolves? They were totally being nice.  They can smell death and knew who would make it and who wouldn’t, so they Kevorkianed some mofos. It was totally out of compassion. … Ok, maybe not. I guess I do agree about the wolves. It would’ve been totally more believable to have cannibals or sasquatchi (plural of sasquatch!) find them and attack. So it isn’t a perfect flick. Damn you and your picking of nits! I want to stab you in the throat with your nit pick. (Not really.)

Oh, but  speaking of wounds… Those wolves were pretty savage, but the cold was way worse. I winced at all the frostbite and frozen digits and tearing, sloughing, freezer burnt skin. And fuck metal and gravity, for real. The batterings and breaking and punctures and shreddings… Oh, that hurts my parts! 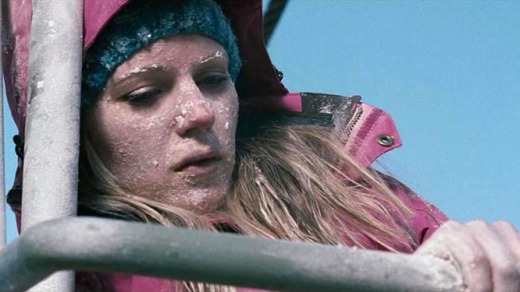 Fisty: Oh, you’re giving me chills, dude! I agree about the nastyliciousness, too. The horrors of Nature unleashed were nicely used, inducing shivers and winces all ’round. Though–no, I will not nitpick. And do you know why? Because despite some flaws, Frozen is extremely effective. Green takes an entirely possible situation, and plays it fairly straight, from the naturalistic dialog to the very real inherent dangers. I was positively RIDDLED with anxiety, and that’s a good thing. Especially effective are all the aerial shots of the cold, silent countryside, and the hapless victims dangling in their precarious position. It’s minimal, as such a simple scenario should be, and solidly suspenseful.  Though Frozen is no masterpiece,  it is capably done and diverting, and I can’t not recommend it.

What about, “This was no boating accident?”

Bill: Meh, but it reminds me of the blurb on the poster. Can we please get past the Jaws/swimming thing already? It’s been thirty-five years. Find a new comparison.

It will do for skiing what … The Dark Knight did for district attorneying!
…Titanic did for taking cruises in the North Atlantic!
… Inglourious Basterds did for being a Nazi!
… Lord of the Rings did for putting on rings that turn you invisible!

Frozen does for skiing what Friday the 13th did for going to camp!

“We all float down here.”

One thought on “Frozen”