What!?:Prodigal son Kurt Menliff returns to his family’s ancestral home, only no one is happy to see him. Kurt had previously left under terrible circumstances, banished and disinherited by his father the count for his infamous and cruel behavior, and the actions that caused a young woman to kill herself. Disgusted with the vagabond life of a pariah, Kurt seeks to wreak vengeance upon everyone from his past life: his father who cast him out, his brother Christian who has the inheritance that is rightfully his, beautiful Nevenka who was once his fiancée but who is now married to Christian, even the servant Georgia who festishistically prays to the dagger with which her daughter Tanya killed herself after Kurt’s desertion. Kurt begins his enterprise when he encounters Nevenka on an isolated strand below the Menliff castle, and the two are irresistibly drawn to one another, just as they were before his banishment. When Nevenka resists, Kurt savagely whips her, a beating that ends in abandoned seduction. Afterward, Kurt returns to the castle, where the family begins searching for the missing Nevenka. While alone in his rooms, he hears a voice calling and approaches the window. The wind blows the curtains around him, and when Kurt emerges from the swirling fabric, the same dagger that killed Tanya is buried in his throat. Though not grief-stricken, save for perhaps the too quiet Nevenka, the family is understandably disquieted by Kurt’s murder. Someone among them must have done it, but who? Lord Menliff, to punish his son for returning? Giorgia, in revenge for Tanya’s death? Christian, to secure his inheritance? Or even Tanya herself, from beyond the grave? Nothing is certain but that death and madness stalk the Menliff castle as the murders continue and Nevenka is haunted by Kurt’s memory–or perhaps his ghost. In solitude she revisits the ecstasy they shared while Cousin Katia seeks refuge in Christian’s arms from the evil and insanity permeating the House of Menliff. 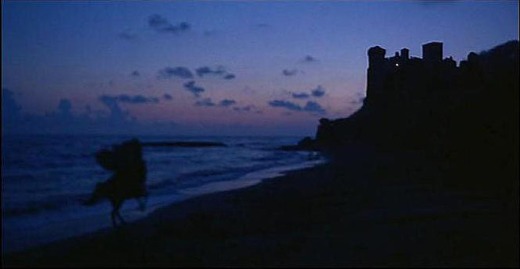 fall of the house of menliff

Seriously, What?!: When The Whip and the Body was distributed in the US, censors went nuts, and the cuts they made rendered the movie totally incomprehensible. Fittingly, it was retitled What?! for the 1965 US distribution; shockingly, it was not well received. But Bava’s tale of terror and desire is a stunningly sensual and moving Italian Gothic–and it is Christopher’s Lee favorite of all his Italian work.

Fisty:This is one of the most sumptuously beautiful movies to look at that I have ever seen. Christopher Lee was once a Grade A, stone cold hottie, and Daliah Lavi is no slouch herself, eerily resembling Italo-Gothic stalwart Barbara Steele. The two and their dueling cheekbones drenched in Bava’s luscious colors and lights would be a delight to watch under any circumstances.

Bill: I’d say she’s no slouch!  In one scene, the camera slowly revolves around her as she plays piano, lit just perfectly to show off her beauty.  She’s stunning.  By that point, you’d already seen her getting off on a lashing she was given down on the beach, too.  So hott.  I have never wanted, so badly, to flog a European girl as I did watching this movie.  And don’t even get me started on her ecstatic, hand biting scene. As for those “luscious colors and lights,” I’ll put my geek hat on and say that, watching this, I was reminded of the Marvel superhero trading cards that the Brothers Hildebrandt painted back in the mid-’90s.  All the lasers and explosions and energy blasts that go along with superheroes made for plenty of  interesting light sources and contrasting colors for the Hildebrandts to play with in their art, which they did with gorgeous results.  The crew behind The Whip and the Body did the same thing (only without the superheroes), creating a movie where almost every frame is like a vibrantly-colored painting.  It’s especially refreshing to watch a movie like this after the last two decades full of films with muted and washed out colors.  I think some of today’s filmmakers need to give this flick a look and see how amazing movies can be when you add a little color to them.

Hey!  Wait a minute!  What’s all this Bava talk, Fisty?  I paid attention to the credits and it said this was directed by John M. Old.  You mean the movie lied?!

Fisty: Well no, not really, Bill. Bava used a pseudonym. You see, it was once fairly common practice to replace overtly “foreign”-sounding names with Anglicized ones to make them more palatable to overseas (American) audiences. Bava used “John M. Old” for TWatB, as well as the spaghetti Western I coltelli del vendicatore (The Road to Fort Alamo), and the similar sounding “John Hold” for a writing credit on I coltelli del vendicatore (Knives of the Avenger). Both actors and crew did this; in TWatB you will find Gustavo de Nardo and Luciano Pigozzi masquerading as “Dean Ardow” and “Alan Collins,” respectively. And then you will also sometimes find actors or directors using pseudonyms to differentiate certain genres of their work (Joe d’Amato is an excellent example of this practice).

Bill:Oh.  I suppose that makes sense.  Oh well.  At least Christopher Lee didn’t use an assumed name.  He was all Christopher Lee, all the time. You know, even though he was used as the main antagonist of the movie, I found him more relate-able than any of the other characters. I didn’t really even see him as a villain, in spite of his sadism. 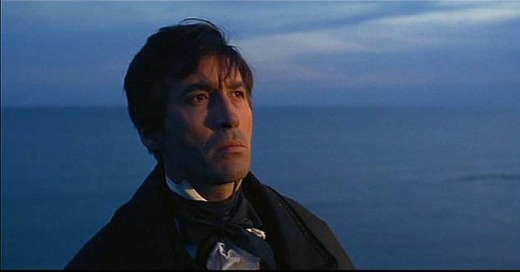 is he a bad boy, or really just a sad boy?

Fisty: That’s because he’s totally not the villain, or even a sadist. It’s all about Nevenka. Nevenka, Nevenka, Nevenka! Now, Kurt IS a cad and a bounder, and he probably always was a bit of a jerk, but I am willing to bet good money that he’s hardly the monster the others make him out to be. He was the favorite before he left, which hardly would have been the case had he always been the “serpent” the Count refers to him as. The Count, now, he is all kinds of jerk–and he taught Kurt everything he knew. Kurt says to his father, “You showed me the way,” referring not to just literally the secret passages, but also the way to behave, to act. Kurt is maddened by his father’s hypocrisy, especially in light of the count’s relations with Nevenka.

Bill: And man, was Kurt’s brother living in his shadow or what.  Constantly talking about how he’s not afraid of him.

Fisty: I wouldn’t be surprised if even Tanya wasn’t the innocent victim Giorgia made her out to be. Perhaps she was scheming to compromise Kurt and force him to marry her, and when her plan failed, she killed herself because she had few options. And her mother might even know that, it could be part and parcel of her hatred for Kurt, that she resents how he didn’t fall into their trap!

Bill: Maybe so. Everyone in that place was fucked, even the servants: “Hello, lady, how about you clean your daughter’s blood off the dagger, you morbid old hag?”

Fisty:I know, right? But back to Nevenka, because after all, she’s the star of the whole show. Kurt only returns home because he is fascinated by her, and he wants his place–including her by his side–back. She is in control the whole time–he even refers to her as his master. In the beach scene, Nevenka strikes him first, spurring him into the games they once played together. When he whips her, he does it for her gratification, not just his own–most unlike your classical sadist. “You always loved violence,” he says, tipping us off that this isn’t something new, that their relationship was always founded on this dynamic. He is neither punishing her, nor revenging himself on her for remaining at Castle Menliff or for her marriage to Christian, instead he is giving her the pleasure she has been denied, both by her surroundings and herself. It is through this release that Nevenka achieves sexual fulfillment. (And notice how, when he first manifests to her, before whipping her and giving her that release, Kurt’s first instinct is tenderness.)

Bound tightly in her small, claustrophobic world, Nevenka is relegated to the position of a decoration, nothing more is required of her than to look lovely, dress prettily, sew, play piano, and then eventually provide an heir for the Menliff family. Whatever desires she may have are thwarted by her position, and by her innocent husband, whose boyish charms leave her cold. (And there’s the small matter of Christian’s longing for Cousin Katia; as a younger son, Christian could have married Katia, but once Kurt left and he became the heir instead, he could hardly marry a penniless relative, so it’s was Kurt’s bride he married.) As a woman in nineteenth century umm, wherever they are in Europe (somewhere with Orthodox Christianity and a seacoast, Romania? Croatia? Ukraine?), trapped in a crumbling castle with only a clueless husband, insane servingwoman, resentful poor relation, and a pervy father-in-law, Nevenka has few ways to exercise power or express her desires, and this imprisonment maddens her. Nevenka can sink into quiet passivity and let things unfold around her, or she can burst forth, like a phoenix–risking castigation and the condemnation of society. Though not a jaded libertine, Nevenka is so wrapped in passivity and boredom that she requires something more to stimulate her, and Kurt provides that for her–at her wish. But since she didn’t and can’t, she passionately hates this aspect of herself. She cannot be both Kurt’s lover and Christians’ wife, but neither can she be happy with the one knowing the other exists, and this is the central conflict of TWatB. If Nevenka had married Kurt, then perhaps she would have been able to fully express her desires. Perhaps–I HAVE GOT TO SHUT UP ABOUT THIS STUFF. 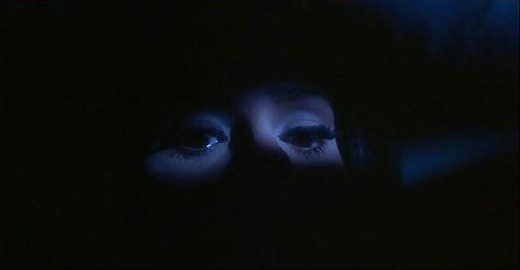 only the shadow knows

When Kurt seems to be haunting the castle–has he returned from beyond the grave? Or is he simply a manifestation of Nevenka’s desires? The further she sinks into a morass of hallucinatory terror, the more we doubt what we’ve seen. What is going on? So much crazy ass SUBTEXT! The Whip and the Body, despite some terrible dubbing (it is surely a crime to not have Christopher Lee dub his own voice in English?) is a masterpiece of color and shadow, a moody and atmospheric Gothic mystery absolutely worth seeing. Though it looks like one of Corman’s Poe thrillers, it is a psychologically compelling film that meditates on obsession and feminine desire. We didn’t even go into all the symbolism with the colors (watch for blue and then red)–not to mention the rose, the whip, and the dagger. We suck.

One thought on “The Whip and the Body”