What’s Happening, Hot Stuff? Late one night, some campers play a prank on an unliked caretaker, Cropsy. The prank goes awry, however, and Cropsy ends up doused in gasoline and in flames (because normal people sleep next to cans of gas). Rather than like, help the poor human torch, the guilty campers run away, and Cropsy is hospitalized for five years. Unfortunately, even with 1981’s technology, skin grafts could only take him so far, and Cropsy is left a hideously scarred shell of a man. When he is released from care at the hospital, Cropsy immediately heads for Times Square (in the fun old days–who wouldn’t?) and murders a harlot. Seems like that revolting cicatrice may conceal a burning lust for revenge. Against hookers. Or whomever.

Meanwhile, at Camp Stonewater, summer proceeds as usual. Boys chasing girls, girls chasing boys, lots of wholesome outdoor activities, and lots of short shorts, tubesocks, and unfettered boobies. You’ve got your full complement of characters who manage to nearly transcend their roles as loathesome Lothario, hopeless dweeb, wiseacre, virginal Final Girl, and so on. Everything about the camp seems alternately idyllic and ordinary, until someone spots a hideous face in a window. Of course, no one believes him, the poor dweeb, and so a group of campers sets out on a canoe trip.

The first night downriver, the campers gather round a campfire, and the Ken Doll–I mean, Todd–tells a spooky story about a caretaker named Cropsy who lurks in the woods in the area … after the story, Demure Karen and Sleazy Eddy take a walk and a skinny dip, and well, one of them doesn’t come back. In the morning, all the canoes are missing, so our intrepid campers utilize their woodcraft and build a raft to get help … but Cropsy’s already there, and he’s got his shears. Let the stabbings and the slashings and the cuttings commence!

Tastes Like Burning! Tastes like AWESOME. Though often dismissed as merely a Friday the 13th wannabe, The Burning is a delightful and brutal addition to the slasher pantheon. Featuring a surprisingly solid cast (though not in light of their future endeavors), gory kills fashioned by Maestro Tom Savini, a classic story, and soundtrack by Rick “Eat Your Heart Out” Wakeman (I can’t help but think of DK whenever I hear his name), The Burning remains fresh long after other summer camp slaying clones went stale.

Fisty: OH. MY. GOD. The Burning is the ne plus ultra of summer camp slashers. Forget F13! For reals. At risk of being iconoclastic, I will state officially that I think The Burning is the superior of the two. That isn’t to say that it’s perfect, but it is surprisingly well-crafted and everything a slasher ought to be.

Bill: Well, I don’t want to start a full-on debate here, but I have to disagree.  The Burning is damn fine fun and an excellent slasher, but Friday the 13th is still better.  But, please, go on and explain why The Burning is so fantastic.  Aside from the softball playin’, panty-clad, booty wiggle, I mean.  That was totally my favorite part.  It reminds me of my favorite part from Night of The Demons: Linnea’s bent over, pink panty, shopliftin’ ass shake.  When I was going through my early pubescent, manic jackin’ period, I would watch that scene, rewind it, rewatch it and repeat (the real three Rs, fuck recycling) until I was satisfied.  I really wish I’d have had a copy of The Burningon VHS back then.  It would’ve gotten a lot of use.  Probably for the tan line scenes, too.  Sadly, I didn’t see it for the first time until a few years ago.

Fisty: What the hell is up with that panty shot? Those are so clearly NOT bikini bottoms. I actually had a circa ’81 bikini I inherited from my older sister, and back then they were all about the crocheted, itty-bitty, low-rise, string bikini (not the thing to wear swimming with a bunch of evil-minded high school boys, let me tell you). But it was pretty hott, as these things go.

What I love about The Burning: What’s left unsaid. That’s right. There’s a lot of ambiguity in it, comparatively speaking. Cropsy, for instance. The only indicators we have that we was in fact a sadistic asshole is that the kids–and the legend–say so. Kids always say that about authority figures. (And they also say he’s dead and haunting the woods, when he was hospitalized. UNRELIABLE NARRATORS!) Oh, and that he goes on a murderous rampage, but after what he went through, who wouldn’t? Some might complain that the plot’s nonsensical–why does Cropsy go after this apparently random camper group? Or the hooker for that matter? (For reals, the hooker? Super authentic. She looked like someone who would have worked the lol-iday inn.) But it all makes perfect sense in Adolescent Logic, and it’s adolescents, both in the movie and in the audience, who tell the tale.

Then there’s the acting, which is head and shoulders above F13 (thanks in part to some fledgling actors who went on to make big[ish] names for themselves on both the big and small screens). Notice that the characters are better developed and more realistic; they don’t just wander off alone to become murder fodder, but instead try to stick together and act sensible.

Bill: It does have an awesome cast.  I mean, Fisher “The Plague” Fucking Stevens is in it.  (Hack the planet!)  And Brian Backer, an early prototype of David Krumholtz, is both believably creepy and sad, as the bullied weirdo.  Overall, all the characters and their portrayals are better than most of what you see in Friday the 13th, but Friday has a couple of standouts, like Betsy Palmer as Mrs. Voorhees and Walt Gorney as Crazy Ralph,  who, individually, are far more memorable and as well acted or better than anyone in The Burning.

the boys of summer camp

Fisty: I also appreciate the way the characters defy the genre conventions. I can’t just up and TELL you–at least, Bill won’t let me–but there are surprises in the bodycount. I honestly was not expecting the hero/ine scenario to play out the way it did; years of watching slashers had taught me particular rules, shall we say, about who lives and who dies and why and how. And The Burning disregards those cherished fundamentals, to excellent effect.

Fisty: And he’s gay. But like I said, it isn’t a perfect film, and I think the two are very close. I happen to think The Burning has a slight edge in most areas, but F13 does other things well. Tension and suspense are somewhat lacking in The Burning, since you know who the ostensible killer is from the outset. Notable exceptions include Tiger searching for the ball and Rhoda’s shower. It does make a nod to twisting the possibilities, but it’s poorly executed (though I will admit, I wondered till the end whether they might play it through). It’s nice that it doesn’t take literally the slasher rule of “A death every ten minutes!,” instead starting with a bang and then going into plot and character development for a long stretch before the kills begin in earnest. And when it comes to the kills, though Savini worked his usual magic, the ones in F13 (though often ludicrous) were much better directed. The deaths in The Burning had great potential–especially the much-vaunted and ban-worthy raft scene–but were so sloppily directed that they were often obscured, pulling the punches. 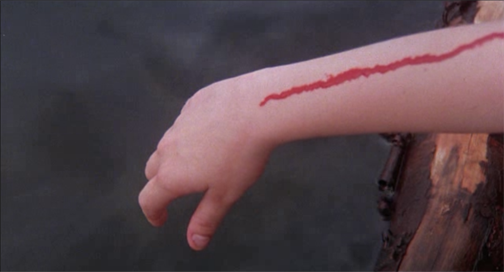 we’re not showing what happens

Bill: I think Friday the 13th is a little better than The Burning, but I am a pretty hardcore F13 fanboy (even watched the fan-made Friday the 13th: Mothers Day).  Regardless of which flick either of us put first, they’re probably the two best Twitch of the Death Nerve imitators we’ll ever see.

Fisty: I think we can both agree that–regardless of your thoughts on F13—The Burning is not just a worthwhile slasher for any fan to see, but a crowning moment in the genre.

The ending is especially nifty, with a nice nod to meta fiction, in that it clearly acknowledges the power of storytelling and urban myth among teenagers by making Cropsy’s existence–and the entire movie–ambiguous. Was the whole thing a campfire story? Or was it a truth that became a legend? Who knows? The kids themselves are our storytellers, and as we have seen, they are highly unreliable narrators.

And since this is marked SPOILERS, how about how those characters generally contravene the laws of slasher folk as generally set down in 1980? Karen, who we assume is at least quasi-virginal and therefore a Final Girl contender, is the first camper to die! After denying Eddy the sex! And Rhoda and Glazer, who only engage in extremely unsatisfying sex, are lambs to the slaughter. While the insipid Michelle and Todd live to the see the end. And how about that weirdly buddy climax? Whoda thunk it?

And I swear to god, this was filmed where my dad’s family is from. If he had succeeded in persuading my mom to stay on the Mainland, this could have been my fate!

The Burning is available on Netflix Watch Instantly right now!